While the use of open-source software is widely accepted and respected within the geospatial industry, organisations are often restricted in their ability to completely embrace these powerful new tools due to the need to utilise existing projects and data from proprietary software vendors.

This is particularly an issue with the ESRI software suite, where organisations may have hundreds (or thousands!) of existing map documents and layer styles which they currently cannot utilise outside of the ESRI software ecosystem. Unfortunately, ESRI software is often prohibitively expensive, yet organisations cannot completely transition to alternative software packages due to their dependence on accessing their pre-existing work.

Furthermore, many providers of spatial data only include ESRI specific layer formatting files with their data supplies. This leaves users with no means of utilising these official pre-defined styles in non-ESRI tools.

The good news: North Road have been conducting extensive research and development, and are pleased to offer a product which allows use of these previously restricted formats within the open-source software environment!

This page describes our SLYR conversion tool and how you can purchase SLYR today!

The conversion tool targets numerous ESRI specific binary file formats, and is designed to allow seamless use of these files within the QGIS desktop application:

All formats are proprietary, ESRI specific binary formats. No specifications describing the formats have been publicly released, and the only currently available tools for working with these formats require access to an ArcGIS installation. Additionally, current tools are severely limited in their conversion functionality and require outdated ArcGIS software installs.

North Road have successfully reverse engineered these binary formats and created custom tools for extracting and converting these file types. These tools are available in our QGIS “SLYR” plugin, which is available today for QGIS versions 3.4 and later.

SLYR also exposes the ArcMap document conversion tools via QGIS “Processing Algorithms“. Exposing these tools as Processing algorithms allows users to utilise the conversion functionality as steps in QGIS graphical models, batch processes, and from PyQGIS scripts and other plugins, greatly improving their flexibility and allowing them be incorporated into wider workflows.

North Road are passionate believers in the power of open source software, and have a history of extensive contributions to the open-source geospatial software stack! A community version of the SLYR plugin is now available through the QGIS plugin repository (and with source code available at https://github.com/nyalldawson/slyr). This community edition plugin has limited functionality compared to the licensed plugin.

While we fully intend to make the full SLYR plugin open source and freely publish the style/LYR/MXD conversion tools, we also require financial backing in order to support the significant time required to completely reverse engineer these file formats and develop quality tools supporting their use outside of the ESRI software ecosystem. Accordingly, the specifications and file parsing library will initially be closed source and available to SLYR license holders only. Exactly six months after we hit the pledged sponsorship levels for each stage of the project (see below), we will open-source that component of the code and update the community version of the plugin.

A SLYR license is a one-time cost, which covers unlimited use within a single physical office location. There is NO requirement to renew the license after a period of time — the one-time license purchase cost entitles you to all future SLYR updates and versions.

To purchase the SLYR plugin, email info@north-road.com for further details.

What License Holders Get

A SLYR license gives an organisation unlimited access to the latest version of the tools for a single physical workplace.

Additionally, license holders have access to priority support for the conversions tools from North Road.

Unfortunately, the ESRI binary formats are heavily dependent on the software version they have been created with, and occasionally we encounter versions of the .style/LYR/MXD files which have not yet been completely reverse engineered and supported by the SLYR conversion tools.

License holders will have access to priority support, allowing them to send unsupported file versions to North Road for analysis and inclusion in the conversion tools ASAP.

The support available to license holders will also extend to assistance with use and installation of the software.

SLYR offers conversion of a large range of ESRI symbol types to their QGIS symbology equivalent:

The SLYR plugin exposes support for ESRI “.style” databases within the QGIS browser panel. When the plugin is enabled, .style files are shown when navigating through the browser. Double clicking these files opens a “style browser” window showing the symbols and color ramps embedded inside that .style file, allowing users to save the converted symbols to their local symbol libraries:

SLYR also adds Processing tools for working with .style databases, allowing symbol conversion to be executed in batches or included within graphical models:

The following ArcGIS symbol types or settings are not supported by QGIS:

As described in Open Source Pledge, the community edition of the SLYR plugin includes this functionality.

The SLYR plugin adds direct support for working with vector LYR files within QGIS, allowing automatic conversion of  common layer properties such as layer paths and symbology. LYR conversion does not rely on any external tools, and is not dependent on installation of any ArcGIS products!

(Note that some data sources which are used by LYR and MXD files, such as SDE databases, cannot be accessed by QGIS or other open-source tools. Whenever a LYR or MXD document points to an unreadable data source, the SLYR tool offers users the ability to redirect those layers to manually converted versions of these data sources)

When installed, SLYR offers tight integration of LYR file handling within QGIS, including:

On launching the algorithm, users are asked to select a layer from the current project and a corresponding LYR file. The SLYR tool extracts the renderer settings from that file, including conversion of unique value and ranges renderers, and applies it to the selected project layer.

This algorithm directly converts a LYR file to the corresponding QGIS QLR file. QLR files are a direct QGIS equivalent of ESRI LYR files, storing both a layer’s source and symbology.

As described in Open Source Pledge, we will release the SLYR vector LYR conversion functionality under an open source license 6 months after reaching this funding milestone.

As described in Open Source Pledge, we will release the SLYR raster LYR conversion functionality under an open source license 6 months after reaching this funding goal.

SLYR has support for automatic ESRI MXD map document conversion. The MXD document format is an ESRI-specific format which includes sets of multiple layers (with their original styles), legend groups, and print layouts. Current functionality allows for conversion of all data frames and layers, page layouts, joins and relations, and metadata contained within a MXD document.

This algorithm, available from the Processing toolbox, allows users to select an input MXD document. The algorithm extracts all layers from the document, and adds them to the current project, keeping their original symbology from the MXD intact.

(Coming soon!) This new algorithm will accept an MXD document input, and extract all print layouts contained within that document into either the current project or to QGIS QPT layout template files.

This final algorithm is the “holy grail”! It allows direct conversion of MXD files to their equivalent QGS project file, keeping as much of the original MXD settings as are translatable to QGIS project settings. 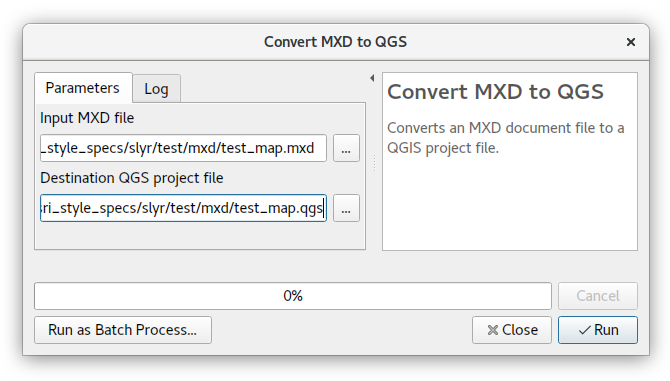 When SLYR is installed, MXD document handling is tightly integrated within the QGIS interface. Specifically,

As described in Open Source Pledge, we will release the SLYR vector LYR conversion functionality under an open source license 6 months after reaching 30 additional project sponsors.

The SLYR tool also allows ArcScene “SXD” documents to be converted. These scene documents are currently converted to a 2-dimensional version of the scene.

Potential future follow up work will add support for MPK map packages and LPK layer packages. These formats will  be exposed within the QGIS browser panel and will support drag and drop to the QGIS main window, much like the LYR and MXD functionality described above.

We also have plans to extend SLYR to support the newer ArcGIS Pro LYRX and MAPX formats, and expect this functionality to be implemented during 2020.